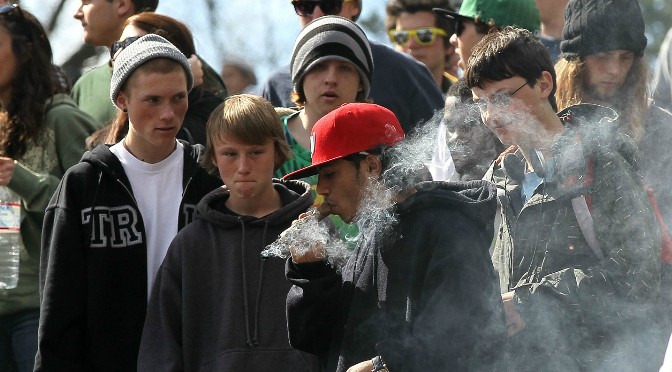 People that grow and sell marijuana and other drugs aren’t the world’s finest to begin with, so it isn’t a surprise that they prey on street kids from California to London and beyond. They’re easy targets for sexual abuse and slavery; a real human tragedy.

In Lake County, California, police arrested 30-year-old Ryan Balletto and 25-year-old Patrick Pearmain, initially for a massive marijuana grow on 680 acres, only to discover that they held a 15-year-old runaway as a sex slave, and forced her to help with the cultivation.  She was even held captive in a metal box 4’ x 2’ x 2’ twice for up to 30 hours.   The girl was from southern California, but ended up at a northern California grow site.

A child sex-ring in Denver, Colorado, used marijuana and other drugs to lure children into their sex trade. Brock Franklin and six others have been indicted on 59 counts.  Officials say that Denver has evolved into a breeding ground for sex-traffickers who lure young runaways, often in exchange for drugs.  In June 2014, when FBI announced it had rescued 168 child victims nationwide, 18 were in Colorado. Tom Ravenelle of the FBI said he’s seen print and online advertisements with keywords like “4-20 friendly.”

Last month in Portland, Oregon, a man was arrested for pimping a 15-year-old runaway girl he had lured through online ads. He traded sex for food, drugs and cash and pimped her out to others, claiming he thought she was 18.

Recently forty-four year old Timothy Burns of Arlington, Texas was arrested for having sex with 14-16 year-old girls — soliciting them on the sugar daddy website. He gave the girls marijuana and alcohol to prime them for having sex and exchanged large amounts of cash.

A friend and colleague reports there are 700 homeless kids in Mendocino County.  Many of these street kids find work during marijuana harvest season, then they languish under bridges or wherever they can find shelter with no means of support. With none of life’s essentials, they have to turn to crime or prostitution for survival. In a county which bases its economy on cultivation this illicit crop, growers are making millions of dollars while creating a public welfare problem for the most vulnerable among us.

My friend says that many of the kids in Juvenile Hall, 13-and 14-year-olds, can’t read or write.  Many have never known the joy of having a birthday or Christmas present. Just forgotten souls, victims of our failure as a society to utilize all resources to keep them away from drugs and provide safe passage to adulthood.

The many adults who wish to use drugs to lure children is a threat to society.  Combined with the deterioration of the family and widespread loss of faith and community, many children and teens are attracted to the alternative, drug-loving lifestyle.

From personal experience, I can attest to the nightmare of trying to cope with a drug-addicted child. Once their brain is altered by drugs, they are incapable of rational conversation. After multiple failed attempts at treatment and rehab, sometimes its tough love and children are forced out of the home. Parents who take this approach need to know the terrible violence they’re exposed to after they become street kids. With no money, job skills, food and shelter these children are perfect prey for anyone who offers a helping hand.

Streets Kids and Youth in Denver and Seattle

Many are attracted to places like Colorado and Washington where they can smoke pot with no possibility of arrest, or get a job working in the marijuana industry. Since Colorado legalized marijuana, their shelters have seen a 40 to 50% increase in homelessness.  Homelessness has also spiked in Seattle.

In Seattle, 50 acres of land owned by the Washington state Department of Transportation houses 400 people in tents. After 5 people were shot in a drug deal gone bad in January, the city is struggling with what to do. The site is rampant with problems of rape, assault and drugs run rampant. It is filed with stolen articles including brief cases, computers, luggage, bicycles and used needles. The human waste leaches into the nearby river, and there is superficial damage on the bridge overpasses. It is considered so dangerous that addiction and homeless outreach services won’t even go there.

Given the many challenges confronting child-rearing today, one thing is clear. Preventing or deferring the onset of alcohol, tobacco and drug use, starting with marijuana, is a big part of the solution. Young people who have moved to states like Colorado for the freedom to use pot are oblivious to the harms that marijuana inflicts on the brains of anyone under age 25. They’re also unaware of those who will exploit them for personal gain with no concern for their well being.