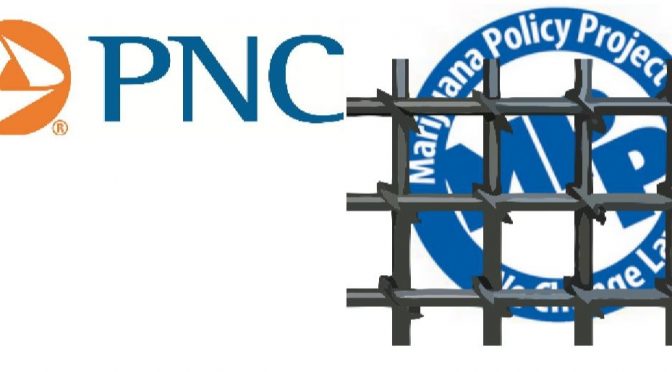 One of the nation’s leading marijuana legalization groups says PNC Bank has notified it that it will close the organization’s 22-year-old accounts, a sign of growing concerns in the financial industry that the Trump administration will crack down on the marijuana business in states that have legalized it.

The Marijuana Policy Project (MPP) lobbies to eliminate punishments for marijuana use but is not involved in growing or distributing the drug — an important distinction for federally regulated banks and other institutions that do business with such advocacy groups.

Nick Field, the MPP’s chief operating officer, said a PNC Bank representative told him in May that the organization’s accounts would be permanently closed July 7 because an audit of the accounts revealed that the organization received funding from marijuana businesses that handle the plant directly.
“They told me it is too risky. The bank can’t assume the risk,” Field said.

A wise decision on their end

Although marijuana businesses are legal in some states, many banks will not provide services to sellers or growers because the drug is banned at the federal level.
But policy and advocacy organizations such as the MPP have been spared. A bank’s severing ties with an organization that accepts donations from such businesses signals a new level of concern in the banking industry.

PNC Bank declined to discuss its relationship with the MPP, but a spokeswoman said that “as a federally regulated financial institution, PNC complies with all applicable federal laws and regulations.”

The bank has held the MPP’s accounts since the organization was formed in 1995.

Some advocacy groups say the abrupt closing of the MPP’s accounts is an unpleasant side effect of growing uncertainty about protections for the marijuana industry in states that have legalized it. The industry enjoys loose protection via a combination of legislative amendments and memos from the Justice Department that effectively allow states to operate medical and recreational marijuana businesses without federal interference. But many advocates worry that the Trump administration is changing course to enforce federal laws and dismantle key protections for the expanding industry.

Attorney General Jeff Sessions is a longtime opponent of marijuana legalization. During a Senate drug hearing in April 2016, Sessions — then a Republican senator from Alabama — said, “We need grown-ups in charge in Washington to say marijuana is not the kind of thing that ought to be legalized, it ought not to be minimized, that it’s in fact a very real danger.”

When asked during his confirmation hearing in January whether he would enforce federal drug laws as attorney general, Sessions replied, “I won’t commit to never enforcing federal law.”
The Justice Department did not respond to requests for comment.

Last week, Sessions wrote to congressional leaders asking for the ability to prosecute medical-marijuana dispensaries. Sessions implored members of Congress to reconsider a rule enacted in 2014 to prevent the Justice Department from using federal funds to block state laws that legalize medical-marijuana cultivation and use.

Legal marijuana is protected by the “Cole memo”

The sale of recreational marijuana, in contrast, is loosely protected by the 2013 “Cole memo.” The memo, issued by Deputy Attorney General James M. Cole during the Obama administration, instructs state law enforcement agencies not to use their resources to prosecute the authorized sale of marijuana in states where it is legal.

The vice president for regulatory compliance at the American Bankers Association says these protections are not enough reassurance for financial institutions. Banks are subject to federal regulation to prevent fraud, money laundering or breaches of privacy.

“Because marijuana is illegal under federal law, banks accepting any money associated with its sale could be investigated for money laundering,” said Rob Rowe, the ABA executive, adding that many banks do not make a distinction between advocacy organizations and businesses that sell or grow marijuana.
But Field’s organization, the MPP, and many other advocacy groups, such as NORML, say banks’ concerns are overblown. The Justice Department has never investigated a bank for offering accounts to state-legal marijuana businesses. In addition, Field said, advocacy organizations are legal entities that are subject to strict scrutiny by the IRS.

Field said the MPP is still seeking a new bank. John Hudak, an expert on marijuana policy and governance at the Brookings Institution, suspects that the MPP’s difficulty in finding another bank reflects banks’ fears that Sessions intends to roll back protections for the industry and enforce the federal Controlled Substances Act.
“It’s no secret,” Hudak said. “It’s a situation that is creating an increasingly uncertain policy environment.”

The first provision of the bill would prevent federal regulators from terminating banks’ federal deposit and share insurance “solely because the depository institution provides or has provided financial services to a cannabis-related legitimate business.”

Many marijuana advocacy organizations hope the bill will pass, offering the industry the banking security it seeks.
“It’s one thing to take a position about making marijuana legal,” said Mason Tvert, the MPP’s communications director. “It’s something different to say these businesses should be able to be bank legitimately.”