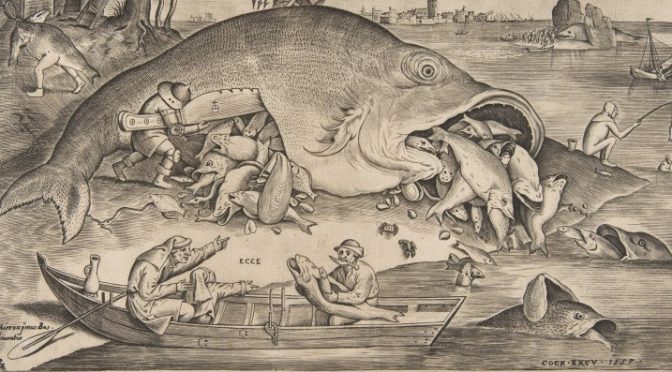 George Soros is the Big Fish who funds many 527 organizations and  controls multiple national and international policies (Read Part 1).   Now we live with outcome of his idea, changing the War on Drugs.   Soros can make a god out of money to influence policy, but this political success is failure in a much bigger and more important way.

Soros donated an estimated $200 million to fund the changes to US drug policy over the last 20 years.   Using his big fish status, he’s swallowing those who can’t fend for themselves, our young people.  The groups he funds blame America’s DEA for violence in other lands, rather than the drug dealers who fight each other and kill.  Politically, these groups target students, even those below voting age. Using a twist of logic, our young people start believing drugs are good and it’s the American government that’s wrong.  (At the same time, they become drug users.)   To say the war on drugs was a failure doesn’t account for the continuous drop in youth drug use between 1979 and 1992.

Legalization ballots that passed wouldn’t have happened without Soros’ help.  In California, Soros influenced Proposition 47 which changed felonies to misdemeanors and let drug dealers out of jail.   This year he’s the source of the Dark Money in the California campaign, about $4 million that is under the banner of Fund for Policy Reform, as uncovered in the Sacramento Bee.

The Lie About Social Justice

Legalizers have successfully framed legalization as a social justice issue — which is not.    In fact, convincing people that hundreds of thousands of people are in prison for marijuana use only — rather than crimes related to the drug or while on drugs — is one of the false narratives.   It is the main reason why people have been persuaded to vote for legalization. The Sacramento Bee recently investigated and couldn’t find a single low level marijuana offender in California prisons.   Criminal justice experts agree that loosening drug possession laws would have little effect on the total numbers in prison.  There are plenty of ways to revise and improve criminal justice without harming people, and drug use harms people. “Ending the War on Drugs” is “for an ulterior, but far more straightforward motive—making a lot of money at the expense of public health,” explains Kevin Sabet, director of Smart Approaches to Marijuana.  Going to prison can mess up lives, but drug abuse messes up lives more.     Legal pot dealers are doing the same as illegal drug dealers did – locating in minority communities.    Legalization is a failure because  it doesn’t improve the lives of minorities who have more to lose by using drugs.

The one initiative written by the Soros-funded ACLU, I-502 in Washington, was more palatable to many voters because it had a DUI standard and strict plans for enforcing marijuana use by minors.  However, these restrictions which allowed I-502 to pass without controversy were immediately stripped. The ACLU even fought against local marijuana bans in court, arguing that cities cannot opt out of the ACLU-imposed law.  So much for the organization’s honesty and sincerity.

Arrests for Blacks go up – After Legalization

Soros’ attempt to change the “War on Drugs” is not bringing about racial justice.   Marijuana related arrests have skyrocketed for Black and Hispanic minors in Denver since legalization. The outcome raises suspicions.  Is the charge of racism that is central to the Drug Policy Alliance’s message a cover for ulterior motives?   After legalization in Seattle, blacks were still arrested more frequently than whites, so Seattle decided it would no longer arrest for the public smoking of pot.

Drug Policy Alliance, like ACLU, pretends that racial justice problems are solved by supporting drug legalization. (Soros and Nadelmann are intelligent enough to know that complex problems don’t have simple solutions.)   A video from Democratic party’s convention this summer shows DPA’s Ethan Nadelmann.  He was rallying and cheering for all the money that can be made in the marijuana industry.  At then end, Nadelmann almost forgot to add a token phrase about social justice.   Like much of the “medical” marijuana ruse, the idea that ending the war on drugs will end racism is a ruse.   It’s a good political cover.

Other Failures with Legalization

The notion that black market would end with legalization has proven false, also.  For example, in Washington, the tax rate is high and the black market is nearly half the market in the state.   As one former federal prosecutor exclaimed, “Legalization doesn’t put drug cartels  out of business; it emboldens them.”

Crime also shot up after legalization, District Attorney Mitch Morrissey explained to an audience in Nevada.   In fact, homicide was higher in 2015 than it had ever been.    (Marijuana is the drug most likely to trigger debilitating conditions of mental illness, homelessness and other drug usage.)    Homelessness as a result of legalization has skyrocketed.  Denver’s Mayor Michael Hancock blamed marijuana legalization on a violent rampage in the mall last summer.

While those who pushed for legalization in Colorado in 2012 argued that tax revenue would help the schools, most schools are not getting money.   In fact the city of Denver has a video busting the myth that marijuana money funds schools.  That argument did not reveal to voters the high cost of regulation.   In fact by almost all standards, marijuana legalization is a failure.  (Many of these myths about taxes, black market, crime reduction were pushed by the Marijuana Policy Project, a group funded by Peter Lewis and his heirs, not Soros.  However, MPP coordinates its message with DPA. )

A George Soros interview in 1999 explained that decriminalization followed by legalization was “an experimental idea.”  Now, the proof is in the pudding. Today’s  death rate from drug overdose of illegal  and legal drugs is 129 a day and growing.

Harm Reduction and “reversing the drug war” is a policy that is killing people at an unprecedented rate. Getting drugs and needles to people is not a bad motivation, but it only saves lives temporarily, for the most part.  Some people die just weeks or months later.  Will Soros and Drug Policy Alliance admit failure?

Teens and those ages 20-34 grew up under the Soros/Drug Policy Alliance philosophy of “harm reduction.”   Harm reduction is taught with little evidence drugs can be used safely.  Instead of educating to prevent the start of drug use, this philosophy assumes kids will use drugs.   In the late 1990s, a lawsuit forced drug czar Gen. Barry McCaffrey to take anti-drug commercials off television. Since that time, funding for  D.A.R.E was cut by two thirds.   Demand for drugs is growing and the United States has 56% of the world’s drug users.

Of course people will always use drugs, but that doesn’t mean we should not try to prevent it, as we did for years until Soros started interfering in our drug programs.

Failure Confirmed and Time to Admit It

Several announcements were made ahead of the United Nations meeting on drugs in New York, UNGASS Conference, in April suggesting that worldwide policy surrounding drugs would change.  They did not.  Soros doesn’t know more than world leaders.

Some of Soros’ pet projects to encourage democracy in other countries may have helped people.  However, his game board is the world.  Soros has controlled the wealth of nations, but he also wants to be chief architect of foreign affairs, drug policy, immigration.  He influences environmental matters, housing, finance, health care, judicial matters and state governments while controlling politics of other countries.   So is the attempt to legalize marijuana and other drugs an attempt to kill people?

The “experiment” did not work. However, there were many “victims,” and Soros should not take this fact lightly.  Marijuana weakens minds, as users lose valuable memory and their IQs actually go down.  Pot users are often less interested in life and work less than others, making them easier to manipulate.   Was the plan carried out with the idea that drugs make the people who don’t die more malleable?

If Soros and his sidekicks at ACLU and DPA do not change policy, their original goals will become more obvious.  Overturning the “War on Drugs”  brings more drug use and death of our young people.  It’s manipulation and death in the guise of philanthropy.