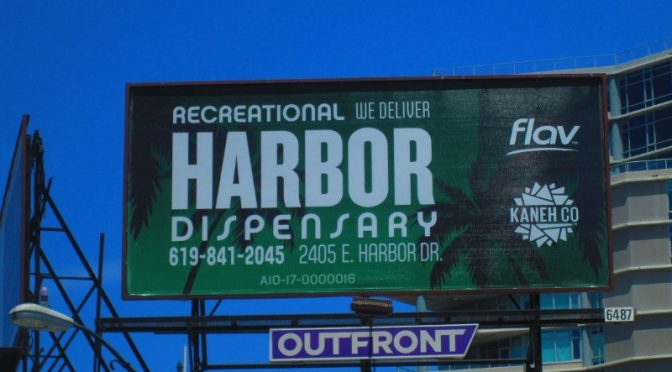 I begin to notice this the more I travelled south into the City of San Diego especially beginning last year. The first publication that I truly noticed that advertised dispensaries was the San Diego Reader which had at least fifteen pages of questionable locations most of which were illegally operating within the county. The names of these locations sometimes ripped off trademarked brands or had silly names with marijuana jargon. The advertisements would be colorful and full of large font and sales words. The dispensaries would make sure to include coupons and first time patient deals which were common during the medical marijuana era. Now that recreational marijuana can be sold in San Diego, the dispensaries have become more professional and bolder. They are starting to sponsor public events such as Burger Week and Ocean Beach Street Fair & Chili Cook-off. This is all in an effort to get their brand out there to the general masses. It is an important strategy for any business to develop brand recognition, so consumers realize they exist. It is especially important to target youth, so that in the future when they become more curious and risk prone, they will have a place to go to for marijuana.

The biggest advertiser I would say is San Diego Recreational Cannabis or SDRC as they have lots of billboards within the city limits. You can see them on the 5 freeway and in surrounding neighborhoods such as Kearny Mesa and Normal Heights. They have front and back page ads in San Diego City Beat along with a sponsorship for Burger Week. In addition, they are on many free newspapers throughout the entire county such as Beach & Bay Press, Gay San Diego and Uptown News. Even in North County, we have seen a front page ad on the Coast News along with Torrey Holistics and Golden State Greens. The other dispensaries realize this marketing strategy and have even tried to connect marijuana use with a healthy and natural lifestyle. I’d recommend reading Sensi which has a quote “The New Normal” along with many off topic articles about eating wisely and yoga. Mankind Dispensary has ads in Natural Awakenings and even sponsored articles. On a side note, Natural Awakenings is a big proponent of CBD oil and have recently dedicated an entire issue on the topic.

The May 2019 issue of Natural Awakenings had an ad for Health Living Products and goes over the ways that CBD and marijuana can “treat” certain conditions. For example, it states “Skin remedy, sleep and relaxation, emotional balance, neurological treatment, pain relief, reduce inflammation, stress management and anxiety cure”. I believe that the FDA would not be too thrilled to see these medical claims. “CBD can benefit people of all ages and their pets!” They target one of the most vulnerable populations to scams with “Many seniors are not aware of how medical cannabis could improve their quality of life and how the stereotypical marijuana users and use has changed.”

San Diego Uptown News which serves the Downtown San Diego area sells cannabis advertising right at the top of the front page of the newspaper above the masthead. In the same edition another dispensary ad offers a 10% discount off your entire purchase.

Ocean Beach, California sponsors an annual OB Street Fair & Chili Cookoff and in 2019 had an unwelcome sponsor, a marijuana dispensary which is located in a nearby town. This turned a family friendly event into something concerned parents would rather avoid.

One California company was even successful in placing an ad in the back of Fortune Magazine. They claim to follow organic practices, but that seems hard to believe, especially when they are located in Humboldt County an area notorious for illegal grows and toxic pesticide use. In an instagram post, the firm promotes its wax this way: “Featured here is our Amber live resin strain, The Doctor. With sweet pine and wood tasting notes and an excellent bedside manner, this hybrid strain delivers fast sedating effects. As always, our live resins are extracted from fresh, flash-frozen, dry-farmed flower from our farm.”

Product placement in television and movies seems to be next. “Cooking on High” is a new Netflix series that is promoting the making of marijuana edibles. They are banking on the popular cooking competition shows with the new legal drug. Of concern is the potential for overdosing considering that edibles cannot be eaten like normal foods. If someone eats too much THC, they are bound to feel the negative physical and mental effects.

It is clear that there are no advertising restrictions for these media outlets for those under the age of 21. Anyone regardless of age can see the coupons, deals and marketing tactics of this growing industry. It does not take long to think of a bygone era (that I did not live through) when Big Tobacco spent millions of dollars on billboards and magazine ads dedicated to spreading addiction to their products. In 2019, we have not learned from past history and are simply repeating those same mistakes.

This news and opinion piece was submitted by a California fan of Stop Pot.