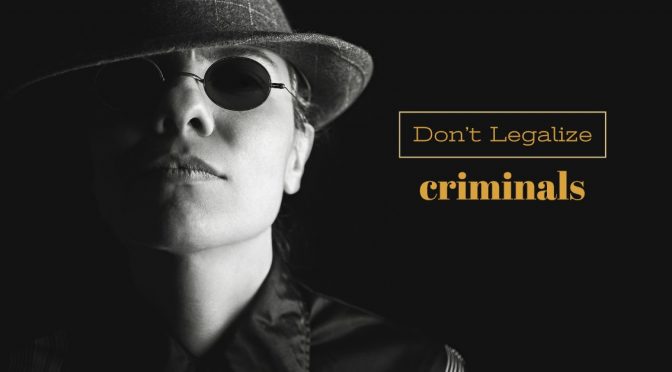 Blacks Law Dictionary includes the meaning of “criminal intent” as “a component of a crime involving a conscious decision on the part of one party to injure or deprive another.” What better definition could there be to the issue of marihuana dealers wanting to operate freely in our society, depriving addicts of their money and children from lifetime success? Must we bless crime and destruction?

A Dale Carnegie course uses a sequence of words to describe a reason to buy something. The phrase is, “fact, bridge, benefit.” Take these three words from an exchange and you have a crime. When the fact is actually a lie and the benefit is destruction of an individual or society, and the dealer knows it, he’s a criminal. The “bridge” is, “what this means to you is…” What does bringing down our society with pot mean to you? Knowing you will injure or deprive the buyer through your product or pseudo service is an act (crime) that should be punishable, yet the pro-recreational marihuana people want you to legalize what they do. Are we so easily duped?

For the past 18-months, Healthy and Productive Michigan, a Group organized to relay the reality of marihuana use, has displayed the facts. The local Organization has met regularly and carefully reached out through several methods to let voters know the truth about using the drug. Educators, government officials, health professionals and others have researched and provided evidence that giving the “go” to criminal activity (selling pot) destroys our future and our youth.

Recreation, as we have long understood, is an activity that renews the mind and body, preparing us for productivity, which is beneficial to ourselves, family and society. If that is true, how can we associate “recreation” with marihuana? Numbing our minds and damaging our bodies is hardly recreation. The single benefit appears letting the tortured souls of our society escape reality to feel happy about what they have not accomplished. Then, the repeated use of pot lets the same ones escape the agony of failure caused by smoking pot. No wonder it’s addictive to so many.

Organizers wanting to “Regulate Marijuana like Alcohol” have set up a sinister potential, capitalizing on repeated lies since the 1960’s. They know that pot use is rampant in the state already and want to make serious money on the backs of those who will be relegated to crime, such as theft, to support purchasing marihuana. What they don’t tell you is; marihuana is already regulated. If it’s regulated like alcohol, should Meijer or WalMart begin selling pot too?

The vote November 6th will identify the percentage of Michigan voters who either don’t care what happens to society around them, are dramatically fooled by lies from the pro-pot group, or believe criminal activity should be legal. Perhaps the low-information voter will be in that number as well.

Not one thing about marihuana benefits society or the persons using it. The only financial benefit goes to the grower and pusher while the user has to commit crimes on the rest of us to buy the stuff. For every dollar in tax revenue from marihuana sales, the state will tax us $9 for social services. Legalizing recreational marihuana would be a self-inflicted crime. How sad that the question is even on the ballot.

Marihuana is the English spelling, and marijuana is Spanish.

Joe Tilton lost his 44 year old son Jody to his pot addiction just over a year ago in FL. Jody never awoke from a nap after using pot and alcohol.