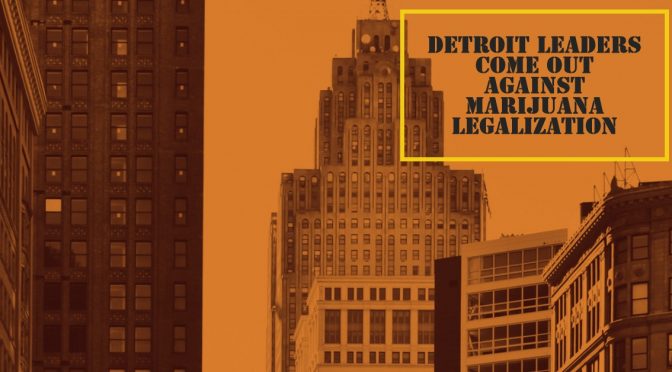 Detroit, MI: Today, a group of new supporters gathered in Detroit in opposition to Proposition 18-1. This group includes:

“We’re proud to stand with these Detroit leaders and fight for social justice. Legalization is about a few rich people getting richer, not social justice. More African American and Latino kids have been arrested for pot since legalization began in Colorado. Legalizing drugs hurt these communities most,” said Dr. Kevin Sabet, president and founder of SAM Action and former Senior Drug Policy Advisor to President Obama.

“We do not support Prop 18-1 and what’s drafted in the proposal,” said Yvette McElroy Anderson, Field Director for Fannie Lou Hamer PAC. “It’s not going to benefit the people but only make profits for big business.”

“I urge you to vote no on the legalization of marijuana in the state of Michigan. Vote no on Tuesday, November 6. Don’t legalize, let’s decriminalize. Our children need hope, not dope,” said Rev. Dr. Wendell Anthony in a pre-recorded video viewable here.  Watch this statement from Rev. Dr. Anthony

“The legalization of weed can also lead to the institutionalization of corporate greed. Do we really need that? Vote no on Proposal 18-1. I’ll see you at the polls.” –Dr. Wendell Anthony

“As one who once struggled with drugs, which started with marijuana use, and as one who now provides Substance Abuse Prevention programs I know the dangers of drugs,” said Reverend Horace Sheffield. “And making marijuana legal for recreational purposes will do more damage than it will be fun.” “Legalization has failed to address very real social justice harms such as the racial disparity in arrests amongst minorities,” said Abu Edwards, Field Director for Healthy and Productive Michigan.