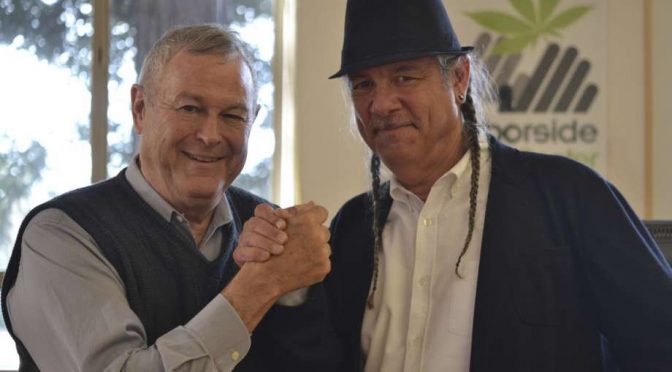 This Leahy-Rohrabacher amendment  is section 538 of Senate Bill 1662 – The Commerce, Justice, Science, and Related Agencies Appropriations Act, 2018. The Amendment limits the ability of the Department of Justice and the Food and Drug Administration to fully enforce federal drug purity and pesticide and environmental laws for medical marijuana products and foods in states that have medical marijuana.

Congress is Considering Withholding Money so the Federal Government Can’t Enforce their own Pesticide and Environmental and Food and Drug Safety Laws. Ever Wonder Why?

Congressman Dana Rohrabacher uses medical marijuana. Steve De Angelo is thankful for the help he gets from Congress so he can line his pockets with gold selling an illicit drug. The problem for the planet and all living things on it is the drug is destructive. The environmental reclamation costs for marijuana grows in California alone could exceed billions of dollars. [1]

Lab tests reveal 80 to 93% of “medical” marijuana in California is tainted with pesticides that are very dangerous to human health. [2] Would the Congress or the FDA allow any other product to be marketed with proven contaminants?

Products being sold as medicine with names like Death Star Pie, Hippie Slayer, Sour Diesel are really not medicine for the chronically ill. ESPECIALLY IF THEY ARE LOADED WITH PESTICIDES.

We need you and others to tell Congress to VOTE NO ON LEAHY-ROHRABACHER. Stand up to prevent a health and financial disaster.

[3]
Facing Addiction in America: The Surgeon General’s Report on Alcohol, Drugs, and Health, November, 2016, Chapters One and two and Appendix D pp.65-66 at:
https://addiction.surgeongeneral.gov/surgeon-generals-report.pdf

Health Effects of Cannabis and Cannabinoids: Current State of Evidence and Recommendations for Research. See: http://nationalacademies.org/hmd/~/media/Files/Report%20Files/2017/Cannabis-Health-Effects/Cannabis-chapter-highlights.pdf