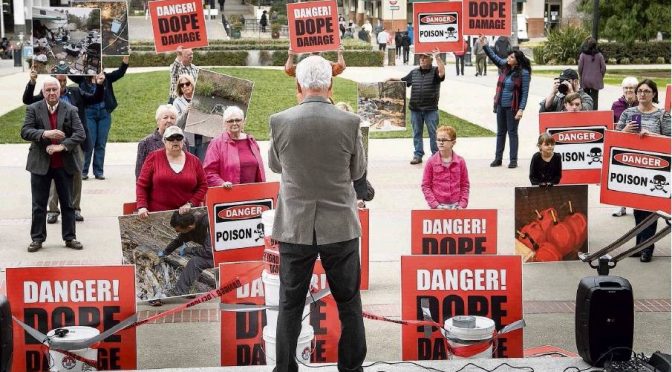 By B Branan, Sacramento Bee  The Yuba County sheriff, Yuba and Calaveras county supervisors and others gathered to complain about illegal marijuana grows in the state capital on Jan.  2

The day after California launched its first legal sales of recreational marijuana, Yuba County officials gathered on the steps of the state Capitol to criticize the state’s cannabis regulatory system, saying it is not protecting them from destructive illegal grow sites.

County Supervisor Randy Fletcher, Lt. Wendell Anderson of the Sheriff’s Office and Brent Hastey, chairman of the county’s water agency, were among the speakers at Tuesday’s press conference, which also featured photos of pesticides and other pollutants found at illegal growsites in Yuba County.

The rally came a week after the Board of Supervisors declared a state of emergency in Yuba County because of marijuana. The board said illegal pot grows are causing environmental degradation and the county does not have the resources to stop them.

Illegal growers are “methodically targeting poor rural counties” because those places don’t have the manpower to investigate and police cultivation sites, Fletcher said.

The Sheriff’s Office has seen the number of confiscated marijuana plants go from 2,000 to 29,000 in recent years, Anderson said.

But Yuba County has voted to ban marijuana cultivation, making the county ineligible for such funds. Fletcher said the county is reflecting the wishes of voters, who rejected the legalization measure as well as three other local measures on marijuana.

Fletcher said rural counties throughout California are in a similar situation: They have banned commercial cultivation but still are confronted with a glut of illegal growers creating environmental problems.

Fletcher said his awareness of pot-related pollution increased after he met Calaveras County Supervisor Dennis Mills at a convention in Reno last year. Mills has been an outspoken critic of marijuana growers in Calaveras County and worked on a report with a public relations firm detailing “the effects of cannabis cultivation on the environment of Calaveras County.”

Mills and the head of the PR firm, Jack Cox, attended Tuesday’s rally. They said they will continue to work with Fletcher and other rural-county leaders to address pollution caused by illicit marijuana farms.