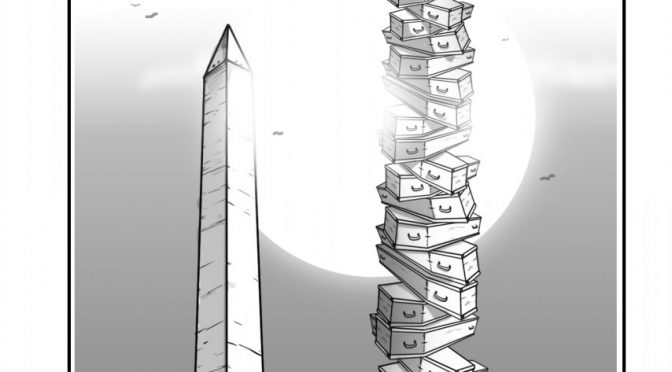 DeForest Rathbone, chairman of the National Institute of Citizen Anti-drug Policy (NICAP), says one of the most notorious examples of “fake news” in the media is the notion that marijuana is medicine. He is so alarmed by the misinformation being spread by the media about marijuana and other aspects of the growing drug problem that he sponsored a full-page advertisement in Monday’s Washington Times, urging President Donald Trump to personally follow through on his promise to address “the growing national public health crisis of soaring drug addiction and overdose deaths.”

“There is virtually no one in America today who does not personally know of a drug-related tragedy among his family, neighbors or friends,” the ad says.

However, Rathbone says the media have played down the serious nature of the crisis. “We have become intimately aware that the nation’s current drug crisis is far greater than is being reported in the mainstream news media,” the ad goes on to say.

The ad expresses support for the President’s commitment to stop the proliferation of drugs across the southern border and throughout the nation.

In his inaugural address, Trump declared that drugs “have stolen too many lives and robbed our country of so much unrealized potential.” On the campaign trail, he repeatedly condemned the illegal drug trade, noting the amount of heroin flowing across the southern border and the rising number of overdose deaths.

The current reporting of annual overdose deaths at 50,000 “represents only about a third of the actual 150,000 total drug-related deaths,” the ad says. “That total includes additional deaths from drug-related illnesses, accident and crime.”

The problem goes beyond heroin and overdose deaths, Rathbone said. The ad notes the growing acceptance by some “Stoner States” of marijuana and its alleged “medical” benefits. However, the Drug Enforcement Administration (DEA) and the Food and Drug Administration (FDA) recently reaffirmed the scientific evidence that there is no medical use for smoked marijuana. “Marijuana is dope, not medicine,” the ad states.

In this case, it’s the far-left marijuana lobby that is truly “anti-science.”

Rathbone told Accuracy in Media that his ad, endorsed by many anti-drug organizations, is part of his effort to counter media propaganda in favor of the drug culture. However, despite his telephone number and email address being featured at the top of the ad, he has yet to receive any calls from the media about the ad and what parents believe needs to be done about the growing drug crisis.

“In the last eight years, owing to a lack of enforcement of federal narcotics laws, marijuana use has escalated from 7 to 13% of the U.S. population,” the ad states. “Fueled by the insatiable demand for all illicit drugs, there are now roughly twice as many gang members in the U.S. as law enforcement personnel, breeding violent crime and civil unrest, mostly focused on our youth.”

This information “needs to be exposed,” Rathbone told AIM. He said the Trump Administration has to be informed and educated about “how bad the carnage is” throughout the country. “This is far worse than anybody is talking about,” he said.

The ad cites the following examples of the damage that is being inflicted on the American people:

·A huge number of parents are suffering enslavement to the drug-related mental incapacitation of children who are unable to function independently. Many of these children bully their parents into housing, feeding and supporting them, and sometimes even paying for their drugs. Such incapacitated kids often end up as street people blighting communities.

·Today there is a soaring demand for foster parents for abused and neglected children of drug-addicted young parents. One community saw a 400% increase in such tragic cases just in the past year alone. Millions of grandparents are raising these kids.

·The nation’s cities are suffering a virtual holocaust of murders and other violence caused by the massive proliferation of nuclear strength, psychosis-producing marijuana and other drugs. In Washington, D.C. the entire Metro train system is dysfunctional and racked with violent crime resulting from too many of its employees smoking “medicine” that is being allowed and encouraged by the city’s continuing pro-marijuana political leadership.

The growing drug crisis can be traced, at least in part, to the policies of President Barack Obama, a member of the “Choom Gang” of heavy marijuana users as he was growing up in Hawaii. He brought his soft policies on drugs to the Oval Office. For example, Obama ordered his Department of Justice to stop enforcing federal marijuana laws. As a result, the ad states, a massive marijuana trafficking industry has emerged in states that have legalized the drug, affecting the nation as a whole.

The ad expresses the hope that new Attorney General Jeff Sessions will declare the pre-eminence of federal over state laws and “restore prosecution of violations of federal drug laws.”

Cliff Kincaid is the Director of the AIM Center for Investigative Journalism, and can be contacted at cliff.kincaid@aim.org

Editors Note:  We applaud responsible journalists like Cliff Kincaid who cover the marijuana issue with concern for the risks and the public’s  health.  Here is another excellent article he wrote: Media Continue Coverup of Marijuana Induced Mental Illness