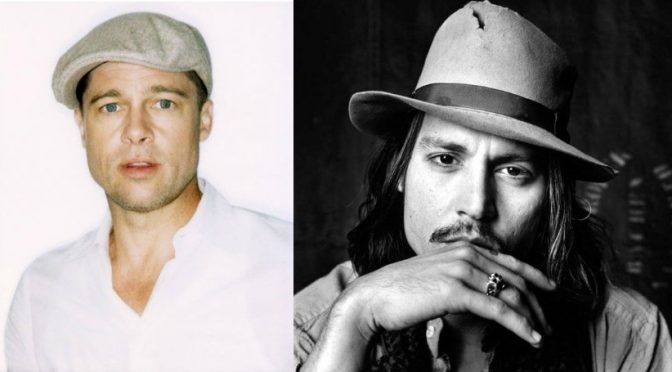 Brad Pitt is one of the most recognizable faces in Hollywood after being in the spotlight for the last couple of decades. What most people don’t know about him are the different struggles and periods of depression he went through early on in his acting career while using marijuana.

In the late 1990’s Pitt admitted to using marijuana heavily which, “almost turned me into a donut,” he recalls. His real life stoner persona was intensified when he was cast in the movie, True Romance, where his character spends his days watching cartoons blowing smoke all over the room.

In 2000, he married co-star of the tv show friends, Jennifer Aniston, and began to start noticing that something was not right in his life. In an interview he said that, “I think that my marriage had something to do with it.

Trying to pretend the marriage was something that it wasn’t.” After the interview he clarified what he meant by his statement saying, “The point I was trying to make is not that Jen was dull, but that I was becoming dull to myself—and that, I am responsible for.” I can only speculate that this meant marijuana was making him into a person he nor his wife wanted to be.

Pitt’s life changed in 2003 while he was working on the film, Mr. and Mrs. Smith, with Angelina Jolie. Although he was still married to Jennifer Aniston, that did not stop the two from hitting it off and after.

Aniston divorced him in 2005 and Jolie came into the picture soon after. The couple got engaged in 2012 and after taking a trip to Morocco, Pitt found it within himself to stop using the drug marijuana. “I just quit,” he said, “I stopped grass then- I mean pretty much- and decided to get off the couch.”

This was a good decision on his part because along with his Hollywood persona he needs to keep up with, he also has six children that he has either adopted or had with Jolie. “I’m a dad now, you want to be alert,” he said in an interview with Parade.

The abusive side of Johnny Depp

Johnny Depp is another famous actor who has had marijuana influence him in a negative way. His roles in movies are always drug addicts or gangsters from George Jung in, Blow, to his portrayal of journalist Hunter S. Thompson in, Fear and Loathing in Las Vegas, drugs always make it onto the set.

By the time Depp was 14 he admitted to trying every drug on the street as well as admitting that he used to self-inflict wounds, or cut himself to cope with stresses in his life. He first began by using marijuana followed by alcohol and the slope became very slippery after that for Depp.

During his early years on camera he was most recognized for his role in the TV show, “21 Jump Street” which was about a young adult who infiltrates a high school for the police to bust a drug ring. After this he started getting recognized for less popular roles in movies like, Sweeny Todd, Edward Scissorhands, Charlie and the Chocolate Factory and Alice in Wonderland he began to get a little bit out of control with his life.

Depp referred to that time period as a “darker period” and started around the time he was dating Kate Moss. One such run in with the police happened after police found Depp, “in a state of possible intoxication” after they found his room at New York’s Mark Hotel trashed.

The judge who heard his case ordered him to repay damages done ($9,761.12) and that was that I guess due to his celebrity status. In December of 2015 there was one instance that was reported where Depp allegedly attempted to smother his ex-wife, Amber Heard, with a pillow and ended up attacking her.

Throughout the attack she sustained a bruised eye and a bloody lip after the star lost control. Heard filed for divorce in May of last year after only 15 months of marriage.

Depp was also spotted a couple years ago after dropping off his daughter, Lilly-Rose Depp, with musician, Marilyn Manson, smoking a marijuana pipe next to the school. What kind of message did that send to (at the time) his 14 year old daughter? Celebrities should not be advocating this type of behavior around their children or other peoples children.

These “role models” are not who we should be idolizing in the spotlight because of their actions towards family and other close friends. Although it is good that Pitt quit using marijuana, more celebrities should follow suit in order to set a good example for their fans and followers.