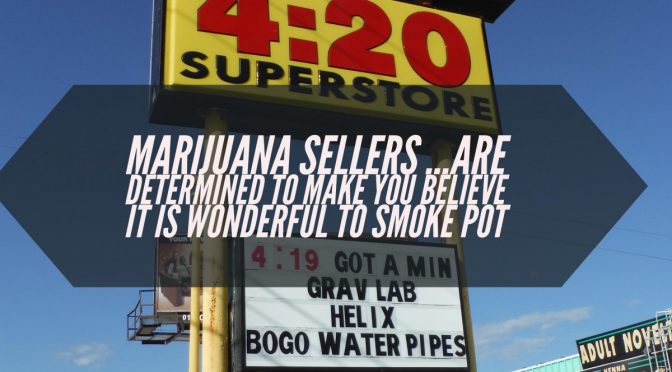 A recent article, Mainstreaming Marijuana, which outlines the ominous trends due to marijuana legalization is sparking some good conversation on the issue. Here is a portion of the comment thread:

I don’t use cannabis. I just can’t tolerate people being punished for using it, having their lives ruined via draconian laws
Your addiction is quite rare. At least you were never in the position of dying or acquiring a deadly ailment via its use.

Most users have no issue or problems with mj other than legal ones.

Thank you for your polite response, which must be because you don’t smoke pot. The pot smokers are unbelievably nasty, cruel, rude and determined to have their way. We don’t have draconian marijuana laws anymore. Today the only time people are arrested and charged with marijuana possession is if they have other charges against them and law enforcement wants to throw the book at them.

The percentage of convictions for marijuana alone are very few. My addiction is sadly anything but rare. I’ve been sitting in meetings now for 29 years and marijuana is the #1 drug that I see people going back out on. It is insidious and anything but good for your health. Our society has raised it’s young people to believe marijuana is completely harmless, so they don’t have a clue of what they are doing to themselves.

Most users have issues and problems, but we have a cabal of marijuana sellers who are determined to make you believe it is wonderful to smoke pot. Think of how it was with Big Tobacco, only in addition to the smoke and tar in your lungs, you’re loaded. People are smoking pot and driving, raising children, going to work, getting divorced, and so on. My older brother doesn’t have a problem with marijuana, he just keeps getting divorced – 4 times so far. No problem.

No matter how obvious it is that a death has occurred as the direct result of marijuana, pro pot advocates will not admit it. For example, there was a case in San Diego where a teenaged girl was hired to babysit a 1 1/2 year old toddler. While at the house, the baby was playing in the bedroom alone, the girl got a call from her Aunt, stepped outside, and the two females started smoking pot out in the car. The thick smoke must have been what blocked them from seeing the baby come out of the house and walk into the street. The baby was killed.

Now, was that death due to marijuana? Of course it was. The pro marijuana people advocated and supported the teen until she was acquitted of all charges and let go. Baby dead – perp walking the street. No matter how awful it is, pot advocates will tell you that it wasn’t because of pot. I’ll give you a true set of statistics. We have 50 million people in the US with a pot problem, 60 million alcoholics, and 15-21 million hard drug addicts. 259 million prescriptions are written each year for painkillers alone – and 250 million for anti-depressants. All of the above is for a population of 321 million. According to a UN study conducted at the end of 2014, the US has 5% of the world’s population – and 80% of the world’s drug addicts. Do we really need to make it easier for young people to obtain and use mind altering substances?

I’m not arguing with you to be spiteful, or annoying, to irritate or be a “right fighter.” I am saying this because I don’t want to see the suicides, the psychotic reactions, the honey oil explosions, the head on collisions, and the terrible toll marijuana takes on our society in hundreds of ways.

Look around online to find information that is not being provided to you by the marijuana industry, because they are feathering their own nests by trying to get the young people to believe marijuana is utterly harmless. Nothing could be further from the truth.

Please read the full article here and the comments that follow:

Mainstreaming Marijuana in the Bend Bulletin