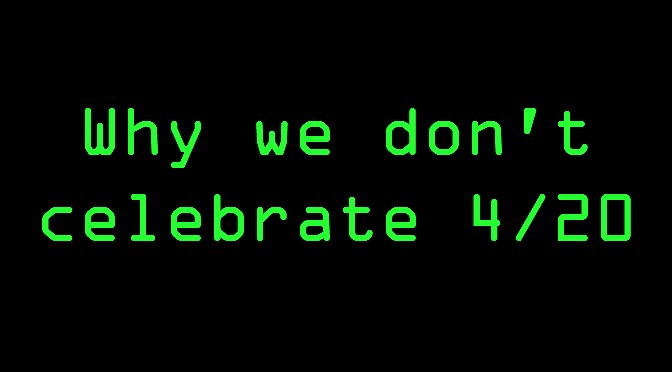 The truth about marijuana evades young adults on April 20. 4/20 is the annual celebratory day when marijuana users “toke up” around the world. Yesterday, marijuana enthusiasts promoted illegal drug culture without a care in the world. Marijuana is a dangerous drug, especially before the age of 25 when the human brain is fully developed. Most young adults including popular libertarian vlogger, Ms. Julie Borowski don’t know this. In her video Ms. Borowski talks about why you should care about marijuana legalization even if you don’t smoke.

In this blog post we refute each of Ms. Borowski’s points. She has her sources. We have ours.

She says: Support for legalizing marijuana is soaring.

We say: Marijuana is not winning across the country: read about other events that demonstrate legalization is far from inevitable, as it is not winning nationwide.

She says: Conservatives are in support of marijuana reform.

We say: Think Twice Before Legalizing Medical Marijuana: doctors and patient groups in these states aren’t demanding these laws. Pro-marijuana groups like The Marijuana Policy Project and Drug Policy Alliance are.

She says: Legalizing marijuana would save $7.7 billion.

We say: Legalizing marijuana would be extremely costly. Enforcement costs for other crimes would skyrocket, plus increased costs of treating addiction. Alcohol is already a net drain on society and on government coffers. Marijuana would deplete government resources and private pocketbooks.

She says: The cost of marijuana prohibition is astronomical.

We say: Colorado plans to spend $130 million on marijuana prevention and treatment. Increased emergency room visits and drugged driving point to one thing: marijuana is a net loss.

She says: 2 million Americans are in jail, the majority because of drug offenses.

We say: only 20 percent of U.S. prison inmates are incarcerated for drug crimes, almost all selling drugs.

We say: Drug policy experts agree that imprisonment for marijuana possession is rare.

She says: There 750,000 marijuana arrests annually and 90% of arrests are for possession only.

We say: No one goes to prison just for smoking marijuana. The drug war didn’t cause mass incarceration.

We say: Not quite because this harmful drug has already harmed many young people. Most young adults are witnessing up close the marijuana dangers.

If Ms. Borowski lived in Portland, OR or Humboldt County, CA she could clearly see how marijuana is putting children, communities and the future generation in danger. Perhaps living in D.C. has shielded her from these facts.