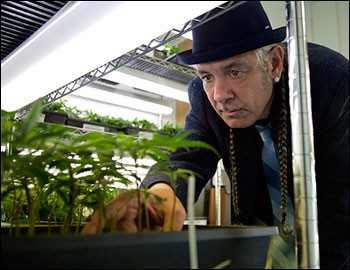 California is already in violation of federal laws pertaining to Controlled Substances. To make matters worse assembly member Rob Bonta of Oakland wants to give license to felons to grow and/or sell pot.  Steve DeAngelo, a pot mogul, denies that the bill was written to favor him.

Once reviled drug dealers are now partners with the state promoting growing and selling marijuana. On October 2015 the State legislature and governor raced to fill the gap for regulations for marijuana, with the sole purpose of keeping the federal government from enforcing the law.

DeAngelo runs Harborside Health Center in Oakland, the world’s largest marijuana dispensary. It operates the businesses of selling marijuana in San Jose and Leandro. Records show that DeAngelo’s dispensary spent $10,000 between October and December lobbying the state legislature and the governor’s office towards the state’s new medical marijuana regulations.

The memo written by former DOJ Deputy Director James Cole specified eight conditions which would trigger federal enforcement in states that legalized marijuana or are selling marijuana for any reason. Literally all eight have been violated in California, but the legislative initiative was directed at one stipulation saying that if states and local communities had good regulations in place, the federal government wouldn’t interfere.

If it weren’t so bad, it would be funny. Our legislators and governor openly admit that the 50,000 cultivation sites in California are growing pot under the guise of medicine. It’s no wonder that California supplies 60% of the marijuana to the US market.  Diversion to other states is supposed to trigger action, yet par for the course, the Obama Administration continues to ignore its fundamental responsible to protect the people by enforcing the law.

In the meantime, the growers in California are destroying the environment. Fertilizers and pesticides are seeping into water tables.  They are diverting stream water to feed plants that consume 6 gallons of water per plant per day, causing irreparable harm to pristine ecosystems.  Poisons used for rodents are killing wildlife including deer and bear, while cultivation in populated areas is causing a public safety problem, polluting the air quality and diminishing the quality of life and real estate values.

The 1200 to 1500 dispensaries, mostly illegal, are selling marijuana edibles and oils made from Butane Hash Oil (BHO). These products are so high in potency, and packaged so poorly, they have actually proven fatal. BHO is illegal to manufacture or import in California, yet the government is just turning a blind eye to the marketing of these products.

CEQA (California Environmental Quality Act) laws require environmental reviews on just about everything in California, yet the State has totally ignored the mass devastation to our planet and communities.

The burden for public health, safety and environmental preservation has fallen on local communities because of AB109, which released prisoners from state facilities to local jails. Prop 47, downgraded felonies to lesser crimes retroactively, so many offenders were released back into society and the levels of crime has escalated dramatically.

If there is any hope for the future of our youth and natural resources, the people are going to have to draw a line in the sand and take back this country back. Politicians at the highest levels of our government have been corrupted by drug money – the huge sums given by billionaires to the Drug Policy Alliance and to the Marijuana Policy Project.