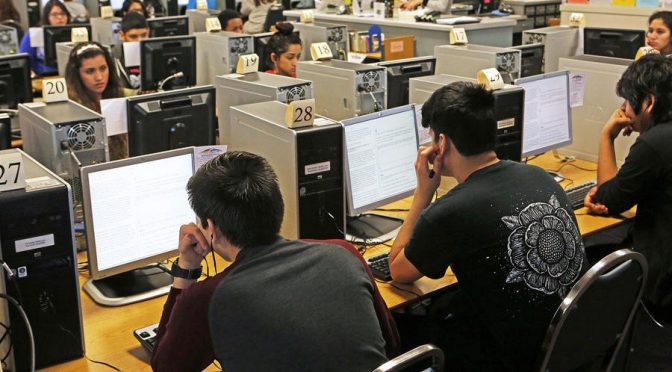 Low income and marijuana are factors in poor school achievement for Latinos and Blacks in California.

based on a report by L.A. Now

The gap in academic achievement between different ethnicities and family income levels is worse than previously reported, based on a Los Angeles Times analysis of results from new state tests given this year in California. The troubling pattern emerged when the scores are compared with those from the prior tests, which were last given to public school students two years ago.

While fewer students in all ethnic groups hit academic targets on the new test, black and Latinos dropped more than Asians and Whites did. Under the previous test, the gap separating Asian and black students was 35 percentile points. The gap increased to 44 percentile point under the new test.

While fewer students in all ethnic groups hit academic targets on the new test, blacks and Latinos dropped more than Asians and whites did. Under the previous test, the gap separating Asian and black students was 35 percentile points. The gap increased to 44 percentile points under the new test.

In that subject, 69% of Asian students achieved the state targets compared with 49% of whites, 21% of Latinos and 16% of blacks. Asian students’ results dropped the least on the new tests, which widened the gap between them and those who are white, black or Latino, the analysis showed. This pattern doesn’t bode well for California’s future, as the dominant ethnic community is Latino (39%), and growing.

White students maintained higher relative scores than their black and Latino peers. For years, educators and state officials have been struggling to improve the academic achievement of students from ethnic groups who have performed poorly. A similar pattern occurred with students from low-income families. Their scores declined at a steeper rate than students from more affluent backgrounds.

Marijuana’s Influence in the Classroom

The Times article didn’t state this, but a little investigation will reveal a direct correlation between the levels of marijuana use and the gaps in ethnic groups. Marijuana stifles motivation, maturation, memory and learning. Particularly during adolescence, it can cause permanent physical and chemical problems in the brain leading to loss of IQ by as much as 8 points. It is also a cause of psychotic breaks leading to violence, mental illness and suicide. In low income communities, the lure of easy money and high profits leads more young people into dealing drugs. More dealing leads to more drug use.

Those concerned about racial disparity and discrimination against blacks, such as the NAACP which is calling for legalization of marijuana, should take note of the correlation of low academic achievement in low income communities and higher use rates of marijuana and other drugs. Making marijuana more readily available exacerbates the problem.

Drugs and poverty leads to lack of academic achievement, higher dropout rates, more crime, mental illness, public health costs and welfare. 90% of jobs are unavailable to high school dropouts, so lack of academic achievement leads to low income employment, or no employment which leads to crime and welfare. In a lifetime, dropouts earn $260,000 less than high school graduates, and $1 million less than college graduates. 75% of dropouts have been arrested; and 80% of those incarcerated are high school dropouts.
The solution to “Black Lives Matter,” and/or to enhance the future for Latinos, must be to keep them in school, and to prevent and control the causes that would inhibit their ability to succeed. That would include stronger measures to prevent or at least defer the onset of marijuana and other drugs. Parents and other adults must be held accountable for providing drugs to minors. In California, that would include 18 year old “adults” who can buy a doctor’s recommendation for $20, then buy marijuana and distribute to younger kids.

California law provides a penalty of $2,500 plus one year in jail for contributing to the delinquency of a minor. If it were enforced, many more young people would have a bright future. Collectively, so would California and the nation.

Roger Morgan is the Founder of Take Back America Campaign, a drug prevention advocacy group based in California.