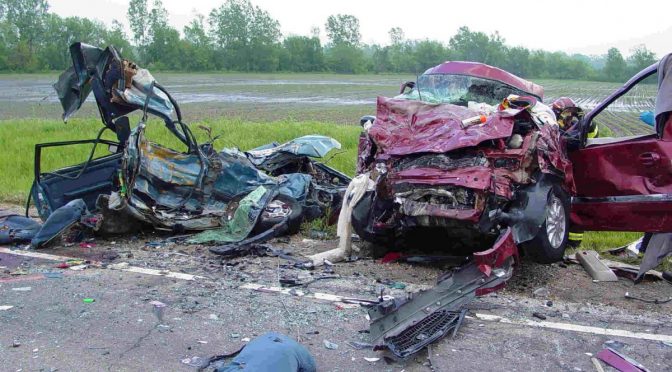 Nationally, one-in-eight (12.6%) of drivers are impaired by marijuana to varying degrees. CASA (Columbia U) reports that drug related deaths tripled in ten years, from 4% in 1999 to 12% in 2010. Some people who use pot say it makes them drive safer, but going 35 in a 65 mph zone isn’t safer. Marijuana slows reaction time, impairs judgement of true distance, decreases motor coordination, and creates tunnel vision where a driver fixates on an object. That explains why so many people are killed on sidewalks. Mixing alcohol and marijuana causes an 8 fold increase in impairment.

Unfortunately, the drivers aren’t the only victims. Four-year-old Peyton Bean of Syracuse, now called the “miracle kid,” barely survived a crash when her stoned father drove off the road and nearly killed her. In June, 2015 in Vallejo, Calif, a 65-year-old man using marijuana killed a woman and injured 6 more people at a bus stop, including her 4 and 5 year old children.

occurred in Vancouver, Wash.  on Halloween 2014, when a stoned driver jumped the curb and killed 7-year-old Cadence Boyer  who was trick-or-treating. The crash seriously injured her mother and two others, one a 6-year-girl.  The driver was charged with vehicular homicide. In Escondido, Calif., 19-year-old stoned driver Elia Mendez got four years in prison for an accident that paralyzed his 18-year-old passenger from the chest down. In 2010, Diane Schuler, high on marijuana and alcohol, drove the wrong way on a New York freeway causing a head on collision. This killed her and six others, including her 2-year-old daughter, three nieces and three men. Drivers going the wrong way on freeways has become common.

In Obelin, Ohio (June 2015), Adriana Young (23) drove through a grassy field into a house, killing Debra Majkut (34) who was sitting on her couch, and critically injuring her infant daughter. In 2010, 28.3% of injured drivers tested positive for drugs, 12.2% for pot. Rosemary Tempel, a nurse in Seattle, was killed by a stoned driver while driving to work on July 17, 2012. Determining impairment is difficult with marijuana because after two hours 90 to 99% of the THC is out of the blood. Unfortunately, since THC is fat soluble it stays in the brain where impairment occurs. It is easiest to measure the level of impairment when the user dies because metabolism stops. In Rosemary’s case, the driver’s blood wasn’t taken until 3 hours and 13 minutes after the crash, and still showed 3.2 ng/ml. Timothy Durden, the driver, had two previous DUI’s, no insurance and previous convictions for trafficking marijuana and cocaine. These convictions were all withheld from the jury who ultimately sentenced him to 4.5 years for vehicular homicide and vehicular assault.