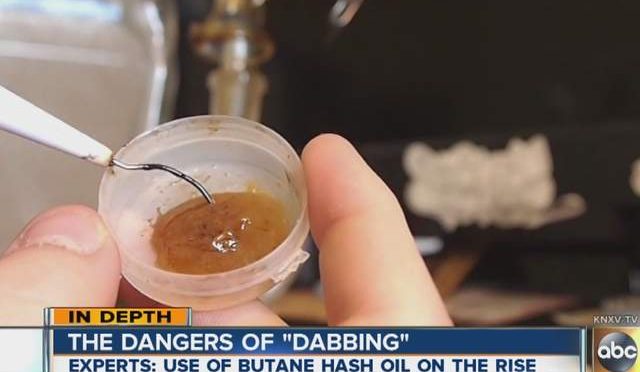 potent concentrates of marijuana.  The terms “honey oil,” “BHO,” “710,” “wax,” “earwax,” “dabs,” “budder” and “shatter” are nicknames for potent extract from the plant.  This practice needs to be discouraged, as some users really flip out over it.

Dabbing appeals to the pot users  looking for the quicker, faster high.  Yet, there are great psychological risks, too, and some users have had psychotic episodes from using this potent substance.   According to an account of a NORML event in California, one person nearly cracked their skull on the sidewalk and another experienced marijuana smoker broke her two front teeth when she passed out cold after ‘dabbing’.

For sellers, it’s an easy way to make large profits.   However, making it at home is so much cheaper, and amateurs who make BHO put themselves in danger.  home.

There are plenty of YouTube videos and other online instructions to follow.  It begins by putting cannabis leaves and flowers in anextraction tube, like a pipe.  Next the colorless, odorless butane is put in that small area to extract the THC quickly, letting it fall through a small filter on bottom.  Another term for spraying the butane is called blasting the marijuana, which pulls the THC right out of it.   Problems are most likely to occur indoors or when there is not good ventilation.

The solvent or butane must be flushed out.  It can be boiled off in a hot water bath, which is why some home producers use hot baths or double boilers. Many commercial enterprises have the butane pumped out with a vacuum vacuum chamber to lower butane’s boiling point, pulling butane from the oil.

The result is a hash oil which looks like honey.  It’s like the crack cocaine of marijuana.  The THC content can be  70 to 85 percent, while the average joint is much lower THC.  After cooling, the oil hardens and is broken into bits.

Butane hash oil must be made in an open or well-ventilated area.  If the butane sparks something else, explosions can occur.  What makes it dangerous is that butane is highly flammable, sensitive to heaters, pilot lights, electric cords, a cigarette or the slightest spark of a match.

State regulations in California and Colorado haven’t stopped the explosions.  California doesn’t allow medi-pot patients to produce BHO.  Colorado and Washington require BHO to be tested for residual butane before being placed on dispensary shelves.

There are many nicknames for butane hash oil: “Wax,” “Honey oil,” “earwax,” “dabs” “shatter” and more.   It could be smoked, vaped or infused into the edibles.   Vaping is a concern, since the vape pens are the e-cigarettes of marijuana.  It is  a way that teens may be using marijuana without detection.

In short, hash oil offers a quick and lasting high for users.   A single hit can last more than a day.   By making it, it costs a user about 50% less than it would by buying it from a licensed dispensary or maker.

6 thoughts on “Dangers of Dabbing, Vaping and BHO”